A monk, a person who has inner peace like nobody else in the world and who always seeks to do good when it comes to both humankind and nature.

There's no doubt that they interest us because we find it hard to be like them amidst the chaos of this world in which we live. But rarely (if ever) have we stopped to ask ourselves: What is buddhism?

To begin with, Buddhism is not a religion as we know them; it's a collection of teachings which seeks, through practice, to end human suffering. It’s not considered a religion in the way that Christianity and Judaism are religions, because its followers do not worship a god, rather they follow the teachings left by a human being: Gautama Buddha. 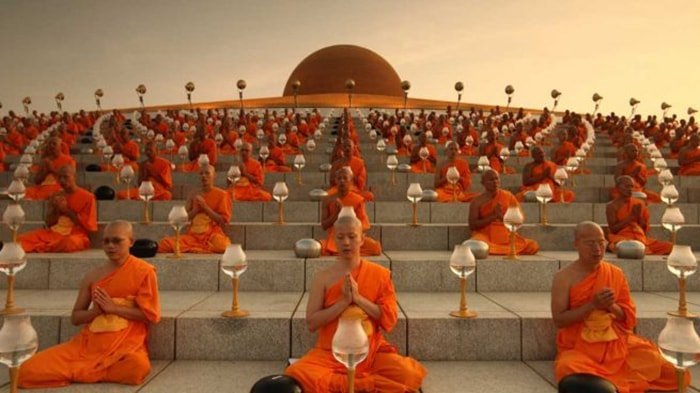 Although recognized as a non-theistic religion, many prefer to call it a train of thought or simply a way of life. But for the sake of argument, let's call it a religion for the time being.

Buddhism is the predominant religion in various Asian countries, but if you travel around, you will find that not all monks wear the same attire. But, why? It's due to the fact that different colors represent different Buddhist traditions: Theravada and Mahayana, the two most important branches of Buddhism (but not the only ones).

The oldest school within Buddhism is Theravada and its meaning describes it well: "Word of the elders". It's the tradition that sticks most closely to the original teachings. The monks of this school are the ones who wear orange, mainly in Sri Lanka, Thailand, Cambodia, Laos and Myanmar.

The Mahayana school, also known as Tibetan Buddhism, emerged later. Unlike its predecessor, its adherents don't follow the original teachings strictly, rather they use them as a guide towards reaching the ultimate goal and are permitted to question or criticize them, coming to their own conclusions.

This school is the most widespread owing to the media exposure of the Dalai Lama. Its monks wear dark red and it’s found mainly in Tibet, China, North India, Japan, Korea, Taiwan, Vietnam and Mongolia.

To not lose the thread, the name Dalai Lama probably sounds familiar but you may not be sure who he is. Here's a quick explanation: Dalai Lama comes from the Mongolian word dalai (ocean) and from the Tibetan lama (reincarnated master) and it is the title given to the spiritual leader of Lamaism, or Tibetan Buddhism. It is the term used within Tibetan Buddhism and the bön religion to refer to a teacher who has gained either partial or full control in death over the form of his reincarnation and knowledge of the place of his new birth. The current Dalai Lama is Tenzin Gyatso.

Tibetan Buddhists consider the Dalai Lamas as incarnations of Avalokiteśvara. And if you've ever seen the Avatar series (not the movie about blue giants, but the series about the bald kid with the arrow on his head), now you know what it's based on.

But… What or who is Buddha?

The word Buddha means "Someone who has woken up" or "Who is enlightened". It is generally used to refer to Siddharta Gautama, the historic Buddha and founder of Buddhism, but it can also be used for any person who has reached something as "simple" as Nirvana.

That's to say, to be a buddha, you must follow the process of spiritual awakening through various practices, in particular meditation, until you reach enlightenment. Enlightenment is not something that can be defined with words, but to give you an idea, it is the freedom of the soul, an end to suffering and the end of the cycle of reincarnation.

Monks don't have any living expenses or taxes because they live in the Buddhist monastery which is maintained by donations. They don't have any food costs either: every day they go out onto the streets with their bowl to collect the offerings of the loyal, which usually consists of rice and vegetables. It's give and take. The monk receives his daily rations and the loyal followers gain merits for their help.

The entire day isn't spent meditating, although it is the most important daily activity. They also dedicate part of their time to maintenance tasks around the monastery, to making pilgrimage in search of offerings each morning, to studying the Buddhist doctrine and to learning from their masters, amongst other things.

We associate karma with them too. You could say it's the law of cause and effect. That's to say that everything you do, whether good or bad, will come back to you in your immediate future and in your next lives. We can all choose between doing good and bad, but we have to accept the consequences.

And to bring things to a close,

Why do monks shave their heads?

Head shaving is the first step to renouncing the material world, appearances, the superficial. To not do it would signify an impediment in reaching the goal of enlightenment.

Would you like to become a Buddhist? And if you were, would you be able to stick to all of their rules?
Translation by Martin Cosgrove